“I wasn’t just hiking for myself anymore. I was hiking for a community that believed in defying the odds, striving for your fullest potential, and helping one another. I was hiking to promote a path that has the power to positively change and impact lives.”

The history of the Appalachian Trail is lined with legendary characters who either completed or attempted to complete an end-to end traverse known as a thru-hike. Each year, thousands of hikers attempt a thru-hike. But only one in four make it all the way. 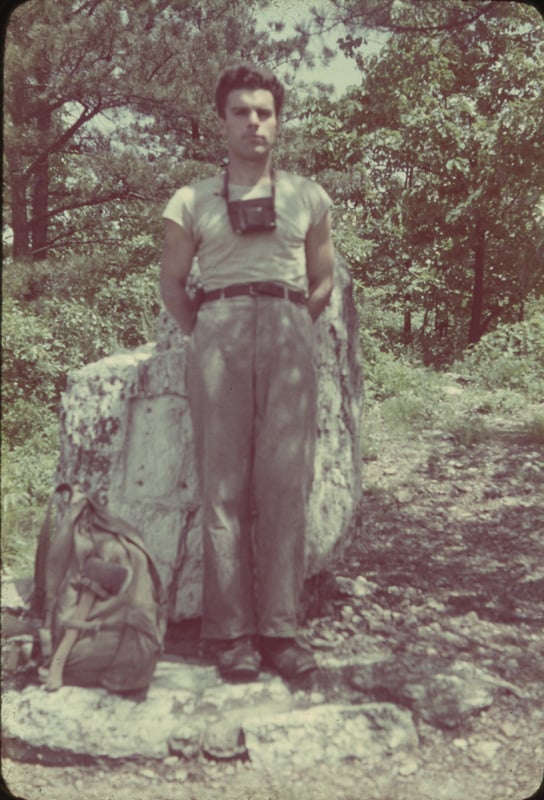 Earl Shaffer on his 1948 thru-hike (Courtesy of the National Museum of American History, Smithsonian Institution)

Earl Shaffer was a World War II veteran fresh out of his post as a radar technician in the South Pacific when he decided to take on the Appalachian Trail as a way to “walk the army out of his system.”

Amazingly, he pulled it off, becoming the first person to complete an uninterrupted trek of the entire trail after 124 days on a grueling incarnation of the modern A.T.

Even more impressive, he did it in 1948 when canvas slacks passed for top-of-the-line outdoor gear and the term ‘backpacking’ didn’t exist.

As Blue Ridge Outdoors Travel Editor Jess Daddio noted in a feature story on the evolution of the Appalachian Trail for our May 2015 issue:

“(Shaffer) wasn’t carrying a featherweight pack and a high-tech cooking stove. Heck, he wasn’t carrying a stove at all, or a sleeping mat, or even a tent for that matter. He had no cell phone, no moisture-wicking clothes, no knowledge of what lay ahead except that there were 2,000-some miles of it through 14 different states.”

According to his New York Times obituary, published in 2002 after his death at the age of 83, Shaffer decided to attempt a continuous, end-to-end hike of the Appalachian Trail after reading a magazine article in 1947.

“He was back home, sitting around the kitchen table with his family,” the obituary reads. “He mentioned an article that said although six or seven people had walked the length of the Appalachian Trail in separate hikes, it might be too much for a single trek.”

So Shaffer decided to become the first.

He mailed home his tent early on in his journey, reasoning that a rain fly could just as easily serve the same purpose. At one point he misplaced his maps and was forced to rely on his bushwhacking, route finding, and orienteering skills.

Few have described Shaffer’s plight during that historic first thru-hike better than A Walk in the Woods author Bill Bryson.

“Often reduced to a rutted, muddy track, the trail Shaffer found was nothing like the groomed and orderly corridor that exists today” Bryson wrote. “He spent long periods bushwhacking over tangled mountains or following the wrong path when the trail forked.”

Despite the insurmountable odds cited by Bryson, Shaffer averaged 16.5 miles a day and completed the entire A.T. in only 124 days. That’s about four months on the trail.

According to the Appalachian Trail Conservancy, the average thru-hiker of today requires five to seven months to reach Katahdin.

Shaffer, or ‘The Crazy One” as he was known on the trail, undoubtedly paved the way for the next seven decades of hikers that would follow in his footsteps. But he didn’t stop there. He hiked the trail once again in 1965 at the age of 46, this time starting at Katahdin and finishing in the south, all the while shaving 25 days off his original A.T. time. 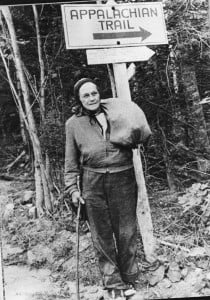 Emma Gatewood was the first woman to ever complete a solo thru-hike of the Appalachian Trail in 1955, and, like Earl Shaffer, she did it when canvas tents and Keds tennis shoes passed for outdoor gear.

In fact, Gatewood was renowned for her impressive lack of reliance on the items that passed for hiking gear at the time.

All she needed to complete her historic thru-hike were several pairs of sneakers, an old shower curtain which she used as a rudimentary shelter, a raincoat, an army blanket, a tin cup, and a first aid kit—all of which she stored in a homemade denim bag that usually stayed perched atop her left shoulder.

Gatewood would go on to hike the trail two more times before she died in 1973 of a heart attack. 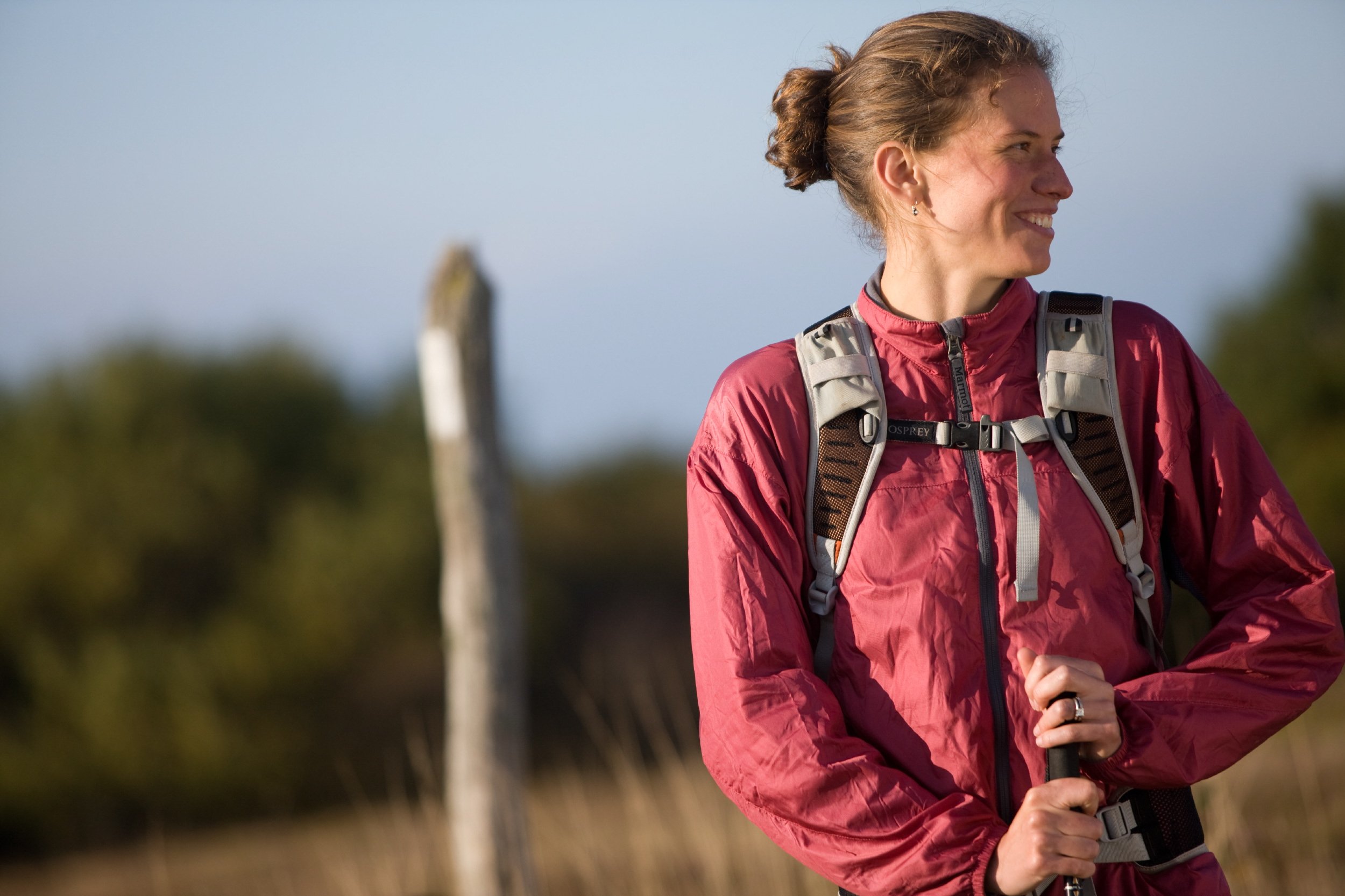 One of the most notorious modern-day thru-hikers is long-time Blue Ridge Outdoors contributor and Hendersonville, N.C., native Jennifer Pharr Davis.

On 2011, she powered through severe shin splints, debilitating blisters, and 17-hour days on the trail to complete an end-to-end AT thru-hike in just 46 days, 11 hours, and 20 minutes. The achievement earned her the all-time speed record for a supported AT thru-hike at the time and made her the first woman to ever hold the title.

Prior to setting the record, Pharr Davis had already hiked the entire length of the Appalachian Trail on two separate occasions, once in 2005 as a traditional thru-hiker, and again in 2008, this time with record-setting ambitions.

Though she came up short of the all-time record on her second attempt, completing the trail in a wildly impressive 57 days, she still managed to earn the women’s record.

But for JPD, the female record wasn’t enough. “I walked down Springer Mountain knowing that I had not used all my energy reserves,” she later wrote. “In retrospect, I realized that I had put limitations on myself throughout the journey.

“For the most part, I was only willing to hike during daylight hours and I stopped at dusk, even when my body felt that it could keep going. And, I was even more disappointed when I realized that I had set limitations on myself based on the fact that I was a woman. I bought into the idea that men are faster and stronger than women and that a woman should consider herself fortunate to be within 10 days of the men’s record.

“Toward the end of the hike it felt as if I were straining for a goal that was much larger and more involved than I had ever imagined,” Pharr Davis recounted in the March 2015 issue of Blue Ridge Outdoors.“I wasn’t just hiking for myself anymore. I was hiking for a community that believed in defying the odds, striving for your fullest potential, and helping one another. I was hiking to promote a path that has the power to positively change and impact lives.” 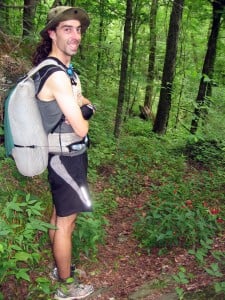 Like Jennifer Pharr Davis before him, he was basking in the glory of a record-setting achievement. But Matt Kirk had set a different kind of record. Unlike Pharr Davis, who credits her husband’s off-trail assistance for much of her success, Kirk had had no outside support during his 58 day, 9 hour and 38 minute journey from Maine to Georgia, a fact that qualified him for a different type of record known as the Self-Supported Appalachian Trail Record.

In a 2013 interview in Blue Ridge Outdoor Magazine Kirk said that he learned of the self-supported record during his first AT thru-hike in 2001 when he was just 20 years old.

“I learned about Ward Leonard’s extraordinary feat of hiking the A.T. in 60.5 days during my first thru-hike of the AT in 2001,” Kirk said. “He accomplished this back in 1990, and it fascinated me that the record had stood for so long. As my competence in fast packing grew over the years and I found myself in a position with summers off, I thought I’d give it a shot.”

Give it a shot he did, and after averaging 37.4 miles per day, he became the first backpack toting, solo thru-hiker to complete the trail in less than 60 consecutive days in over two decades. 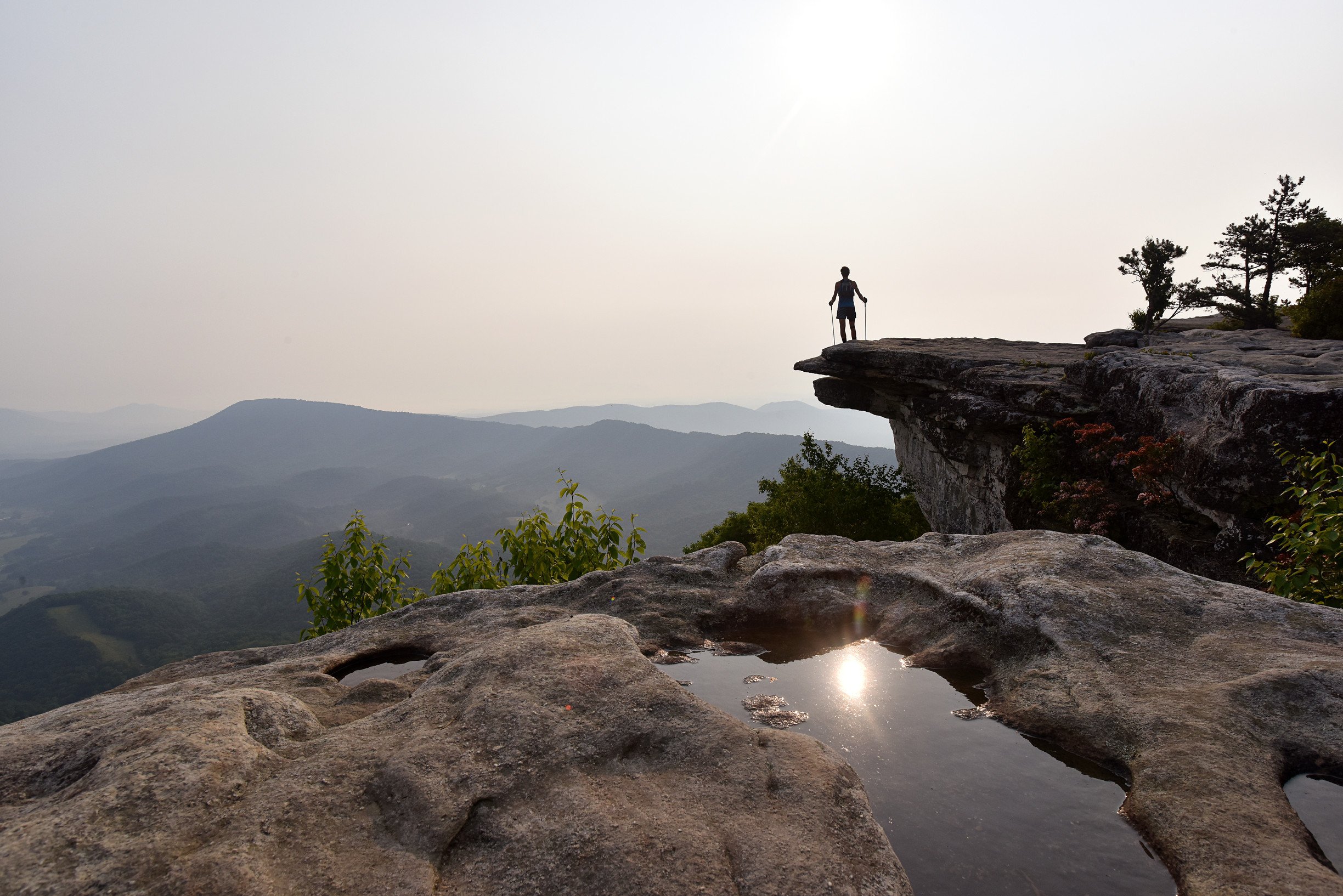 Perhaps the most infamous of all the AT record-setters is current supported thru-hike record holder Scott Jurek. Back in May of 2015 Jurek grabbed and held the attention of the entire Appalachian Trail community and onlookers around the world when he announced his intention best Jennifer Pharr Davis’ time of 46 days, 11 hours, and 20 minutes.

Jurek’s reputation as one of the world’s all-time best ultra-runners  and his role in the plot of Christopher McDougall’s bestselling book Born to Run preceded him, so when he announced his record-setting ambitions and set off to achieve them, millions of eyes shifted in his direction.

Like so many things do these days, it all played out in real time via social media channels like Instagram and Facebook. On his first day Jurek logged an astonishing 53.9 miles, traveling from the southern terminus atop Springer Mountain to Unicoi Gap in 13 hours 16 minutes and 42 seconds. 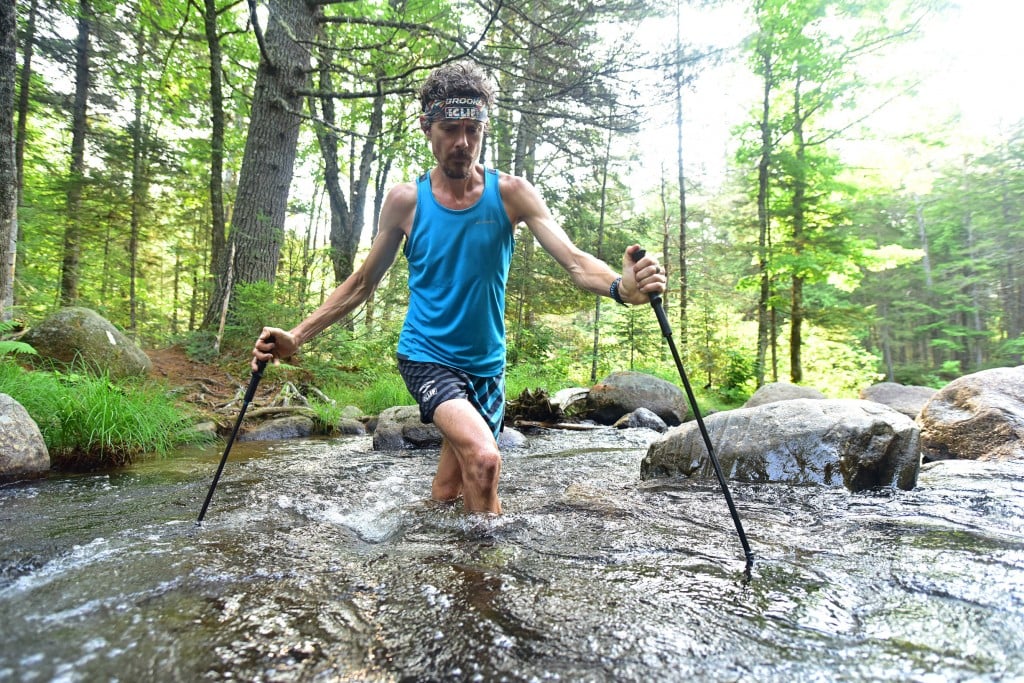 Jurek crosses a creek along the A.T. Photo by Luis Escobar

He continued to cruise for several days, posting impressive times day in and day out until he encountered serious injury in the Smoky Mountains of North Carolina. It was around this time that Will Harlan, editor in chief of Blue Ridge Outdoors, caught up with Jurek on the A.T.

“I joined him on the trail near Big Bald, N.C., six days and 300 miles into his trek in early June,” Harlan wrote in the August issue of Blue Ridge Outdoors. “When I met Scott on the A.T. in June, he was anything but joyful. He could barely walk. His knee pain had begun in the ragged, rugged Smokies, and he had been overcompensating with his left leg for the past 50 miles. He soldiered up the steep climb to Big Bald, but by the time we reached the windswept summit, he was reduced to a hobble. He had torn his left quad.”

For many, it seemed unfathomable that an AT hiker could pull through with such a serious injury, but Scott Jurek isn’t just any hiker.

He’s a world-class and world-renowned endurance athlete. Not only did he power through the injuries, sustained early on when so much treacherous trail lay spread out before him, but he somehow maintained his record-setting pace. And when he triumphantly summited Katahdin on July 12, 2015 at 2:03 p.m. ET he became the all-time record holdy by a slim margin of 3 hours and 13 minutes. 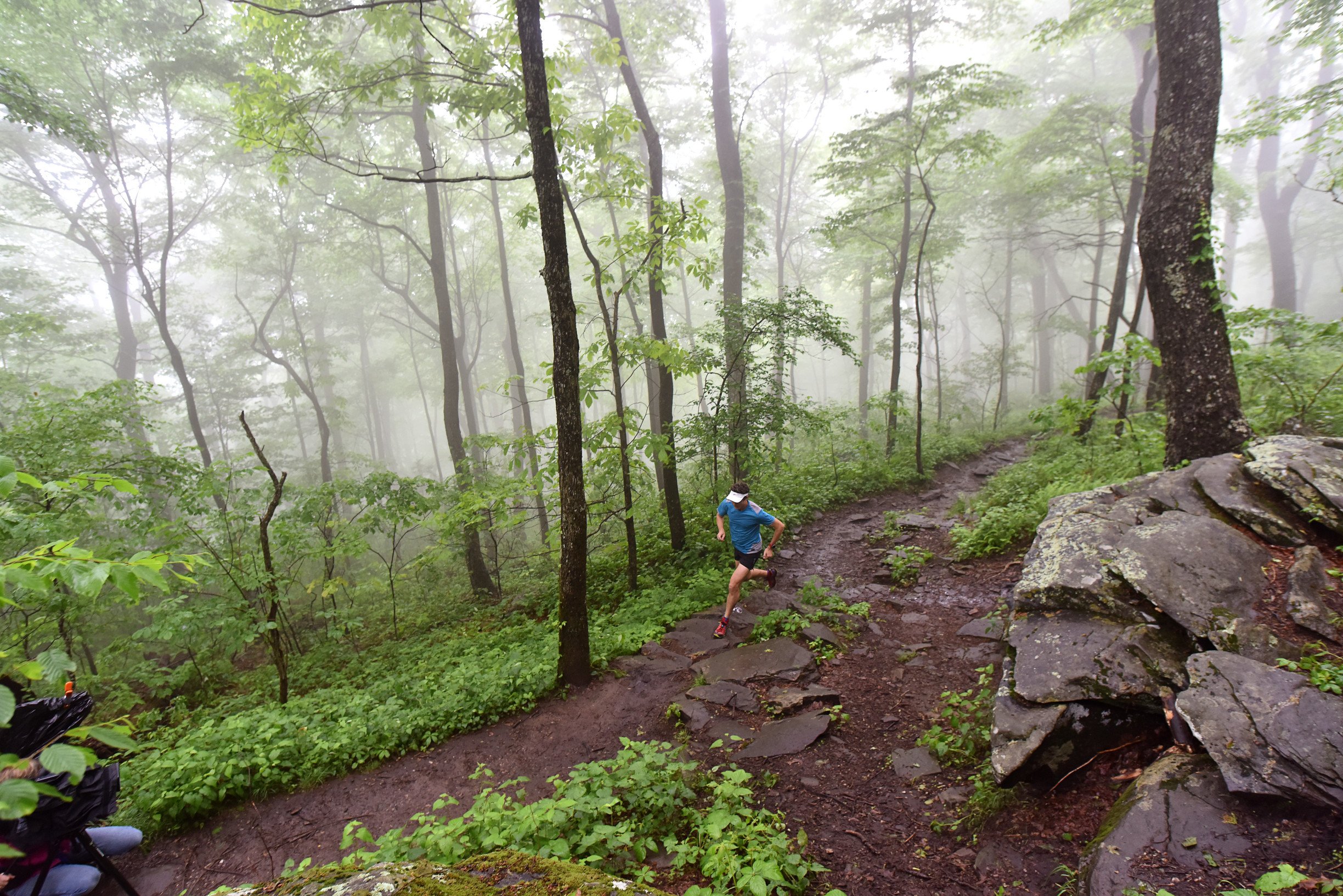